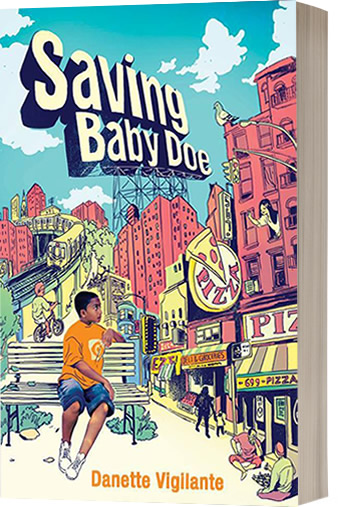 When Lionel, a thirteen year old Latino boy convinces his best friend, Anisa, to sneak into a local construction site with him, neither is prepared for what they find. Wrapped in a t-shirt and left in a Porta-Potti is a newborn baby girl. Lionel and Anisa spring into action and vow to protect Baby Doe at all costs even when adults try to take matters out of their hands. But Lionel knows what it means to be abandoned by a parent. His dad left him years ago, and he’s determined Baby Doe will grow up knowing she is loved.

Desperate to keep her out of foster care and convince his mom that they should take her in, Lionel realizes the first thing he needs to take care of a baby is money. So when a local dealer, offers him a high-stakes way to make some fast cash, Lionel must make a decision. How far is he really willing to go to save Baby Doe?

We take the elevator to the third floor, then walk through a door that reads HOSPITAL EMPLOYEES ONLY.

The room is more like a large closet. One chair, a sink, a tall garbage can, and shelves piled high with the same polka-dotted hospital gown I wore yesterday and some towels.

Jasmina has me wash my hands, then put a gown on over my clothes. Then, after putting on her own gown, she unlocks another door by punching some numbers into a small wall panel.

This next room is the nursery and it’s much bigger. Six large windows look out into the hallway so that visitors can see the babies.

There’s seven babies in all and some of them seem huge, with big round heads and chubby cheeks, while others are scrawny, with pointed heads and longish hair.

I ask Jasmina about the tiny white pimples on some of the babies’ faces.

Each little crib is more like a clear plastic box the size of a laundry basket. They’re on wheels and have information written on large index cards attached to the front of the crib. Stuff like last name, male or female, and date of birth. Off to the side are two wooden rocking chairs, each with Winnie-the-Pooh characters painted brightly on the backs.

Two people, a new Mom to one of the babies dressed in pajamas and an older man using a cane, look in through one of the windows to ooh and ahh over one of the babies. The older man keeps wiping his eyes with a tissue but his smile stays in place the whole time. I want somebody to look at the baby we rescued that way. With so much love for her that it bubbles up and overflows.

“Here’s the little princess.” Jasmina leads me to a crib that reads Baby Doe and the date we found her. “Isn’t she just beautiful?”

She’s in her own category when it comes to looks. Her head is a normal size and her face is perfectly round and clear. She’s like a small pink rosebud— beautiful and smooth. Her dark silky hair is brushed into what looks like a tiny Mohawk. She’s the prettiest baby in here. The only thing she has in common with the other babies is that she’s wrapped tightly in a green and yellow blanket. I smile, thinking how much she looks like a little burrito. She isn’t crying now but sucking happily on a pacifier. I’m glad because I think she’s cried too much already. I force myself not to think about how somebody threw her away. “She’s …” I’m surprised by my need to catch my breath. It’s another second or two before I can finish. “Perfect.’

As soon as I say it, I know the word “perfect” isn’t good enough. It’s even more than that, but I’m having trouble putting my feelings into something I can understand. All I know is I want this baby never to be hurt or left ever again.

We watch her quietly as she stares off somewhere and I wonder what she’s thinking about. When I lean into the crib to get a better look, her hazel eyes find mine. She doesn’t blink or turn away and it’s almost like she knows me. I finally realize that the feeling I have is love. But not the kind of love I have for my mom. It’s scary and good at the same time.

“I think I can arrange that,” Jasmina says. “Have a seat on one of the rocking chairs and I’ll find a nurse.”

The nurse introduces herself as Cheryl. She’s short and wide and wearing purple scrubs decorated with baby bunnies. A bright orange headband holds her red hair away from her face. It’s the kind of red that looks more like red velvet cake than the kind you’re born with. Her eyebrows are bushy and red too. She’s nice, though, much nicer than Lucille. I wonder if that would change if she knew how I acted yesterday.

After instructing me on how to hold a baby, Cheryl places her in my arms and right away it feels like everyone else has vanished and it’s just me and her. She’s small and delicate and as I watch her fall asleep I hold her closer and feel my love for her growing into something powerful and new. I look at the man and woman still at the window and that’s when it hits me that my love is bubbling up and overflowing too.

“All right, Lionel,” Cheryl laughs energetically. “You seem to be a natural at this. Would you like to feed her?”

“I don’t know. What if she chokes or something?”

“Don’t worry about that, sugar, you won’t be alone. I’ll be close by. I’ll be right back with her bottle.”

“She’s doing quite well.” Jasmina touches my arm but I barely feel it. “And all because of the part you played in her life. Without you and Anisa, I don’t want to think about what might’ve happened.”

I don’t want to either, but I can’t help it. She would’ve died, and no one, especially a baby, should die because nobody loved them. With that thought comes another— one that shocks me but still feels right. It’s a no-brainer when I really think about it. Since I love her more than anyone else, I should be the one to give her the life she deserves.

The only way to do that is to take her away from here. I just have to figure out how.

In this sensitive book, Lionel and Anisa struggle with real-life problems that are much bigger than they can handle alone. However, the two are supported by caring adults. This book excels in the portrayal of genuine, warm relationships between young people and important adults in their lives. Real life problems, such as drug addiction and teenage pregnancy, are not glossed over. This book’s a complex realistic fiction novel featuring Latino characters for the middle grades; we could really do with more like it.”

Vigilante’s finely tuned depiction of Lionel’s neighborhood and of his jumbled feelings…is both believable and engaging… a great selection for middle school readers, who will empathize with Lionel throughout.”

The Bulletin of the Center for Children's Books (BCCB)

Vigilante writes about tough subjects with an engaging clarity and a tender touch.”

Touchy topics…are tackled frankly and with tremendous insight. Many aspects of this book are especially welcome for middle-grade fiction, including the authentic urban setting…and a cast of multidimensional Latino characters.”